These are the best pride tattoos you’ll see today. Maybe all year. Be proud! Gorgeous artwork. Be comfortable in your skin. Then ink it…

Everyone struggles to be who they are in the world.  For some, that struggle is harder given the stigma of their lifestyle.  In recent years, things have changed for the better and people are able to be freer and out without worrying too much about the dangers, others pose to them.  It has taken courage to step out and say, “I am gay.”  Now, the LGBTQ community no longer has to live in fear and shame; they can now ‘wear their pride on their sleeve’ or anywhere else they damn well, please.  This post is to honor some of those brave people for finally coming to terms with life and being brave enough to live for themselves and not for others.

15. Love Is Not About Gender How does the song go?  Is love a many splendid thing?  One thing that love is not is confined to gender.  These little pride tattoos show the different variations of love between men and women.  Nothing is ever set in stone and seeing the symbols mixed together is a wonderful way to show your pride as a bi- or pansexual.  It really is possible to love everyone. Many people turn to music when life gets hard.  Songs have a way of telling our stories in ways we never thought possible. This quote, sung by Mary Lambert in the Macklemore and Ryan Lewis song “Same Love,” speaks to those who are told to change.  Even if they wanted to, it simply isn’t possible and it shouldn’t be anyway.  A love of music can get people through a lot of different emotions.  If you have a love of music, check out these music tattoos. For as long as anyone can remember, the rainbow has always been associated with the LGBTQ community.  The colors of the rainbow represent the diversity within the gay community with each color representing a different meaning.  Over time, it has changed from the original eight-color design to the six-color design commonly used today.  The rainbow is bright, colorful, and easy to see.  For these reasons and others, it is often used in all things promoting gay rights and equality.  Here the colors are used in a watercolor style, following the line of veins in the arm.  As pride tattoos go, it is a pretty cool idea, proclaiming that the wearer does, in fact, bleed in the colors of the rainbow and it is in their blood, not a choice. 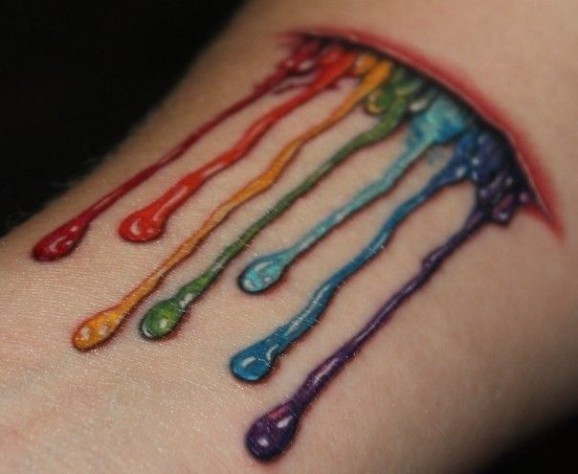 Much like the photo before it, this tattoo represents the idea that being gay is not a conditioned state.  One does not learn to be gay, nor do they actively choose to be the focus of hate and ridicule. However, the people in the LGBTQ community live each day with this blood in their veins and the ‘gay’ is there inside.  I wish I knew the story behind this one, and if it were placed on the wrist or near the elbow, it is hard to tell.  Some people cut themselves as a way to relieve the pressure and stress of life, so this could be a way to show that by coming out, they have surpassed the pain and stress that comes with being closeted and are finally able to live for themselves. 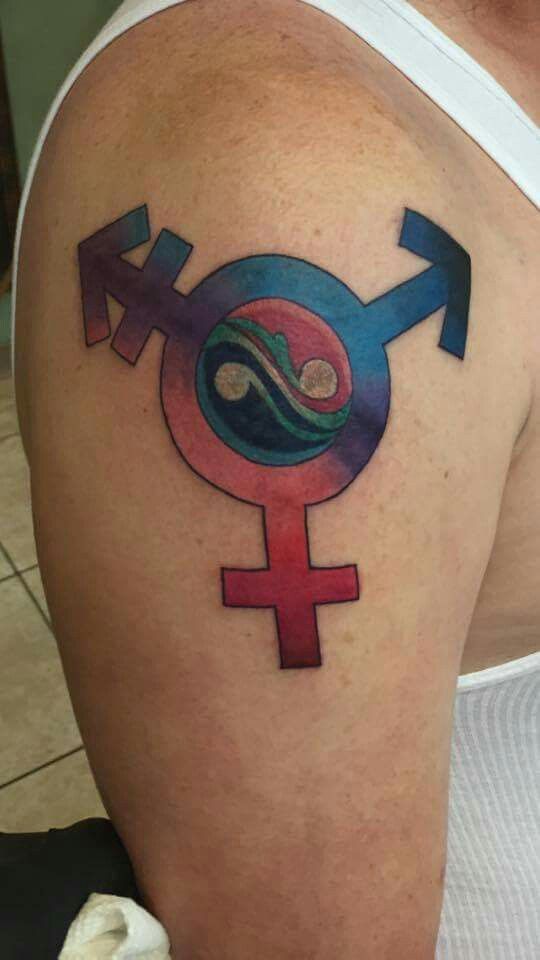 This symbol is not one seen in many pride tattoos, but it depicts the idea of gender fluidity.  The symbol incorporates those for man and woman and puts them together on one side, showing that gender is just another label placed on people at birth.  For some, the lines are not so clearly drawn and they may find themselves wavering between male and female in feeling.  This tattoo of pride portrays the idea of being both and not being afraid to let others know that gender is unimportant to the wearer, but being comfortable in their own skin is a top priority. The main thing the LGBTQ community wants in life is simply to be treated equally.  The Human Rights Campaign, which fights for LGBTQ rights around the world uses a equals sign to signify their continued fight for equality.  This symbol can be found in not only in members of the gay community but in straight allies as well.  It is a way to show your support for others and for them to recognize a friend.  This lovely equal sign tattoo has a mandala, or perhaps a flower, incorporated into it, making it one beautiful piece.  This wonderful little tattoo would make a great addition to our forearm tattoo page. 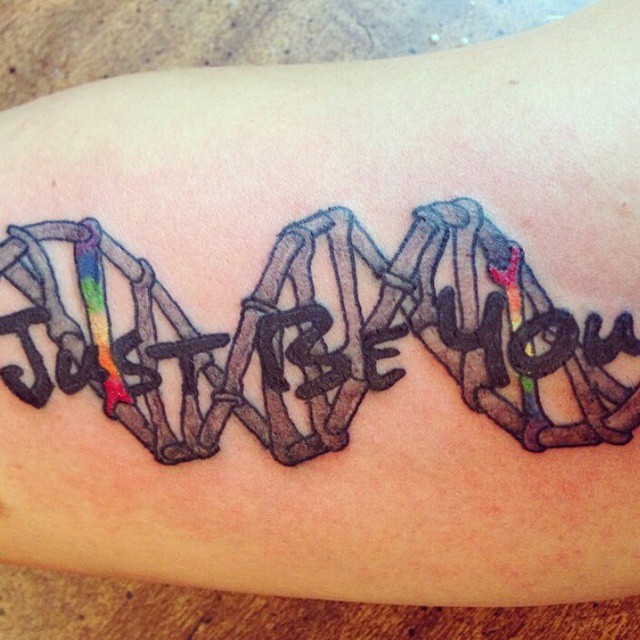 One of the most common themes in pride tattoos is the idea that those who are in the LGBTQ community are born that way, that being gay is in the DNA and not a conscious choice.  By using a DNA double helix overlayed with the words ‘Just Be You,’ I think this tattoo gets that point across quite nicely.  The added color in a couple of the ‘rungs’ just makes it fun. Being pansexual means you are sexually attracted to pretty much everyone.  It is a sort of hyper-bisexuality.  People who are pansexual will find love anywhere, with no regard to gender or orientation.  Pansexuality is the epitome of loving freely, and this wonderful little tattoo is a cute way to show pan pride. Another common theme in pride tattoos is that of freedom; the weight off one’s shoulders when they step up and say “Yes, I’m gay.”  That idea of letting your troubles blow in the wind is perfectly depicted in this adorable little dandelion tattoo.  The little wisps or ‘wishes’ are floating away in the breeze, finally free to spread and live on rather than being confined to the stalk.  I love the little bits of color on the end of each one, giving this little tattoo a pop of color.  When it comes to flower tattoos, this is one of my favorites. 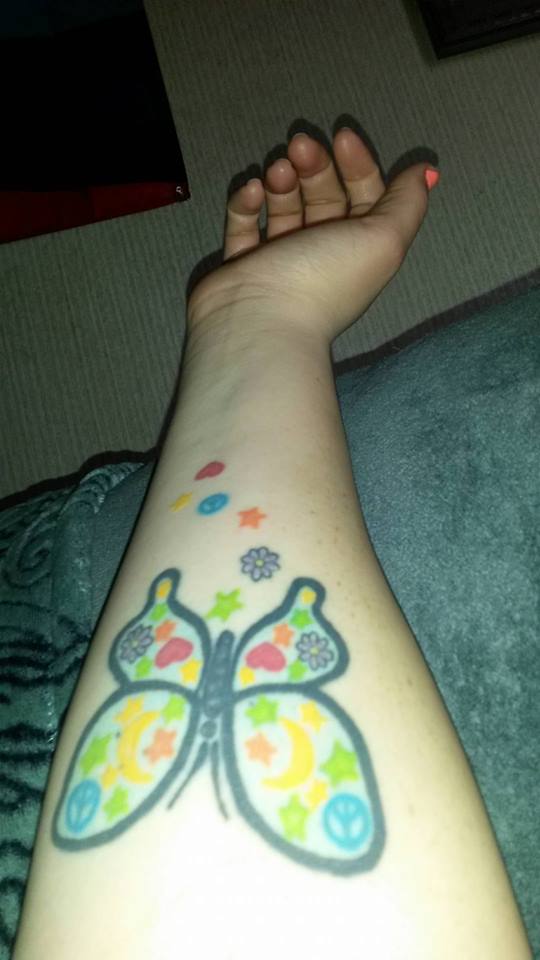 Pride tattoos can tell a simple story, and for each person, that story is a little different. Susie Hilton says of her tattoo, “I got this the day I came out to my family. It represents pride and rebirth into something beautiful and leaving happiness and peace along my journey.”  She also wanted to point out that though it is not a rainbow, nor does incorporate any rainbow colors, it carries a message with it.  This little piece serves to show that the journey, though hard at times, does not have to be a struggle, and peace and happiness can be carried along with it. 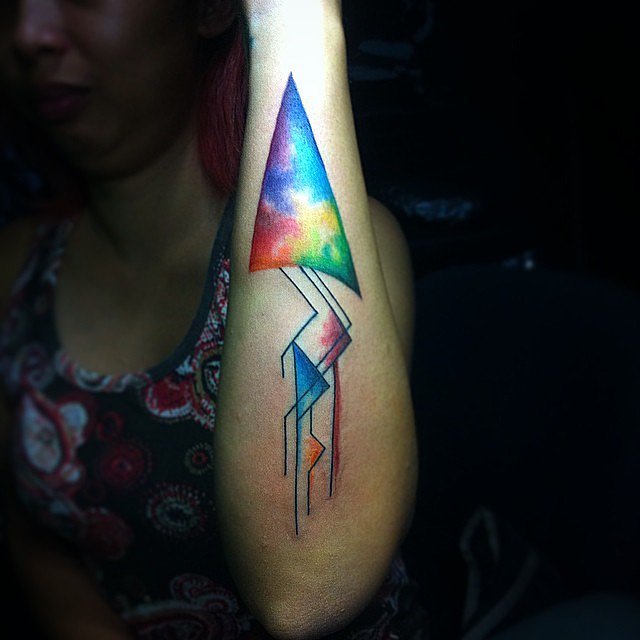 Taking the colors of the rainbow and incorporating them into a shape or design you love will serve the purpose you are trying to convey with your pride tattoo.  This geometric, sharp-lined design is just plain interesting to look at! It never hurts to have a little fun with your pride tattoos. This little leg piece uses lego designs of the legendary flamboyant group The Village People.  Each little man is shown in his costume, putting a fun little spin on gay pride tattoos.  Who says you have to be serious?  I absolutely love this little piece!

3. Love Is In The Heart Pride Tattoos This lovely little lined tattoo depicts two male figures holding hands.  It is a simple piece, with the only color being used to make the hearts stand out.  The idea behind this one is that love is focused in the heart muscle and does not come from anywhere else.  Always follow your heart and don’t listen to the haters. Here are more pride tattoos: The NOH8 campaign has gone a long way to spread peace, love, and acceptance throughout the world.  Adam Bouska’s photos, done in pure white with duct taped mouths take a poke at bullies and urge people not to spread words of hate.  These pictures are known worldwide and are intense pieces of art for a cause.  Having the NOH8 logo as a tattoo is a fairly good way for the LGBTQ community and allies alike to show their support. This wonderfully colorful forearm tattoo belongs to Nic Rodrigues.  Nic says, “I got my tattoo because I finally accepted who I was as a person and wanted others to know that too.”  He stated that his tattoo is a permanent reminder of what he had to go through to get to where he is now.  Where is he now?  He is half of an amazing couple of men starting life together in a relationship stronger than most I’ve ever seen in my life.  Nic, your tattoo is doing its job.  This wonderful tattoo serves as a constant reminder that though the journey is long and hard (hehe, couldn’t resist a solid gay joke), it was worth it, in the end, to finally accept who you are and where you belong.

Get a daily email

Signup for a daily email on the latest posts of tattoos from the community.
Subscribe for free